From the nursery school of the Club Tennis de La Salut founded in 1958 and a pioneer in all ‘Spain have emerged great masters and tennis champions who have achieved historic victories on the courts around the world. These successes show a deep-rooted tradition and are a recognition of the perseverance that the Club has always shown.

We can say with great satisfaction that El Salut is the only club in the world that has, among its members, two Masters of world tennis, such as Manolo Orantes in 1976 and Àlex Corretja in 1998.

In addition, two of the four players of the Spanish team champion of the Davis Cup 2000, in Joan Balcells and Àlex Corretja, are players of our club.

At the beginning of the course, all students (except the adult school group) will be given the official equipment of the Club. It is recommended for use in training. Students participating in the championships will be required to play with official equipment.

For the Club website www.ctlasalut.com (private members area) if you are not a member you do not need to register

A) Counted B) Deadlines

Tuesday and thursday from 8pm to 9pm

The main goal of this activity is for the little ones to approach tennis in a playful way, motivating them to learn to master the racket. It encourages the learning of skills related to technical aspects of tennis (basic right and back kicks, grips …), familiarity with the elements of tennis (net, racket, ball …) and works to ensure that they can acquire basic motor skills

Games of dynamization and familiarization with the environment, work on the concepts of tennis and psychomotor skills according to the level of the group.

The aim of this stage is for students to lay the foundations worked on in the previous stage (bases of motor coordination, speed work and technical work) and to get started in the work of flexibility and range of motion. , and in endurance work.

The aim of this stage is to improve all the conditional abilities (improvement of the work of force, speed, resistance…) and to obtain a constancy in the game. All the technical, tactical and physical bases of tennis are intensified and strengthened. And they start working on injury prevention.

The aim of this stage is to achieve maximum sports performance, optimizing the technical-tactical and physical work. There is also a lot of work related to the preparation of official competitions to provide players with sufficient resources to be able to face each match with guarantees.

The aim of this stage is to achieve an optimal evolution in the player’s game, it has a great impact on the technique of the students. The work of preparation to compete in youth circuits, championships, teams continues … The players have the option to come to train every day if what they want is to dedicate many hours to improve their tennis and to combine with studies in the morning. Depending on the goal of each player, the training methodology is customized to the maximum. In addition, they are accompanied by a coach in tournaments / competitions.

The main goal is achieve the best results for the competitions.

Since 2019 responsible for the tennis section of the club.

Champion in more than 40 national tournaments.

1st place in the FCT youth circuit in 2006, both in the CADET and JUNIOR categories

Top 6 in the CADET category of Catalonia.

Top 20 in the JUNIOR category of Spain.

ITF and ATP tournament player, traveling to places like SOUTH AMERICA and ROMANIA.

Absolute champion of Catalonia by teams.

2 times semifinalist of Spain by teams.

More than 20 years of experience as a tennis coach.

Tennis coach at the Health Tennis Club since 2022.

Since 2012 it has been part of the Official Register of Professional Sports (ROPEC).

SPANISH COACHING course of the Professional Tennis Registry in Miami. 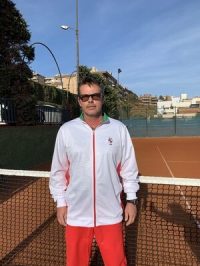 Since 2014 Tennis coach at the Health Tennis Club.


We would highlight victories over Sampras, Hewit (when he was number 1) or Ferrero (no.2). He was part of the Spanish Davis Cup team in 2002

He has trained with Fernando Luna, Alberto López, Alejo Mancisidor and Lluís Bruguera

In 2011 he traveled by RFET to Les Petits Princes du Lac d'Annecy. 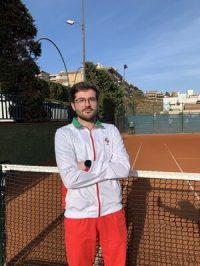 From 2019 physical trainer of the tennis school

Degree in physical activity and sports sciences - University of Vic

Participation in championships in Catalonia and Spain, in different categories.

Player in La Salut Tennis Club teams, from 1994 to the present.

Sparring at the WTA Arantxa Sánchez Vicario, at David Lloyd in Barcelona, 2013.

Title of coach in mini tennis by the Catalan Tennis Federation, obtained in 2015.

Title of tennis monitor by the Catalan Tennis Federation, title obtained in 2002.

5 years of experience as a coach.

From 2019 physical trainer of the tennis school

Degree in physical activity and sports sciences - University of Vic

Head of the primary school and the “kid’s tennis” project of CT la Salut.

Co-manager of the club’s competition school.

2017 Tennis Coach of the Competition Group, Racquet Club of Memphis.

Since 2021 Tennis coach at the Health Tennis Club.

Degree in Animation of Physical and Sports Activities.

Graduate in Physiotherapy from the Autonomous University of Barcelona.

We resume the Social Championships.

The Joan Compta Trophy – In Memoriam – was created by our Club in 1972 and designated as the Spanish Championship by the Real Federación Española de Tenis from 1980 . Since then it has always been held at our facilities, and the Club takes care of the accommodation and maintenance of all participants while they are in competition. With a registration of 64 Clubs (32 in men’s category and 32 in women’s category) from all over the State and nearly 300 young people aged 12 to 14, the Joan Compta Trophy has become one of the most prestigious state tournaments in the world. younger categories in tennis competitions.

Joan Compta promotes coexistence and the exchange of experiences between players, coaches, managers, relatives, etc. and helps train our young people through teamwork and sport. Recognition by institutions, federations and the media and the large number of applications we receive to be able to participate in the trophy means that the work of the Club, always at the forefront of promoting sport, meets its objectives.

The 49th edition of the Spanish Mapfre Children’s Tennis Championship for teams, the Joan Compta in memoriam Trophy, which will be held at the La Salut Tennis Club in Barcelona, ​​began on Tuesday 10 August.

Club Tenis València in the men’s category and Club Tenis Barcino in the women’s category were the champions of the Joan Compta 2021 Trophy which was held at our facilities after the cancellation. last year due to the Covid-19.

The 49th edition of the Mapfre Spanish Children’s Tennis Championship for teams was attended by 54 teams of which 29 in the men’s category and 25 in the women’s category.

Participating teams in the men’s category and female: 11

Clubs participating for the first time:

In female category female and male 5

El Club Tennis de La Salut yesterday paid tribute to member Jaume Furió in recognition of his successful tennis career and his human courage. He is currently the person who has won the most titles in the whole state, and has become the first player to win 26 individual Spanish Champion titles in the different categories.

The institutional act of homage began with the signing of the Club’s book of honor, followed by a luncheon where he was accompanied by his friends, the President of the Health Tennis Club, Mr. Felip Ródenas and the presidents of the Real Federación Española de Tenis, Sr. Miguel Díaz Roman, Catalan Tennis Federation, Mr. Jordi Tamayo and the Federation of the Balearics, Mr. Toni Ferragut, along with other institutions and personalities.

At the end of the lunch, a commemorative plaque was inaugurated which will be located in a preferred place on track 3 and will be called “Jaume Furió”.

In addition to the name on tennis court number 3, the Jaime Furió International Veterans Tournament has been created, which will start on Monday, August 22, until August 27, 2022.

Jaime Furió is currently the person who has won the most titles in the whole state:

Don’t miss our news, promotions, championship results and much more.

Open every day of the year.